The Historical Society at the Gibby House & Old Fire Hall

The Society was originally formed in 1957 as the Arcade Sesquicentennial and Historical Society for the 150th anniversary of the settlement of the town. In 1970 the name was changed to more accurately reflect the Society’s mission. The AHS is dedicated to collecting and preserving objects, records, and other artifacts that illustrate the history of the Town of Arcade and the surrounding area. The Society collections include a house museum with period rooms showing aspects of Arcade life from 1865 to the present with an emphasis on the 1920s and ‘30s. Special exhibits of items in the collection or on loan are held throughout the year.

The Gibby House is the Society’s house museum and was willed to the Society in 1983 by a history-loving village resident, Vernon Gibby, along with the contents of the house and a portion of his estate.The Queen Anne style home was built for Vernon’s father, John L. Gibby, in 1903. Only four people have lived there: John  & Mary Gibby, their son Vernon, and his wife Marjorie. The house was designed by Buffalo architect Frederick Mohr and has changed little from when it was built, the only alterations being porch enclosures and a new kitchen.

John Gibby was a very successful businessman. He owned and operated several  cheese manufacturing businesses in the area. His and other factories made western NY something of a “cheese capital,” receiving their raw milk from the numerous dairy farms in the area. Without fast, refrigerated transport in the late 1800s and early 1900s, milk was best used to produce cheese. Vernon joined his father in the cheese business and retained it for about a decade after his father’s death. He then operated an appliance business from the house and was an accomplished electrician, photographer and cabinetry maker 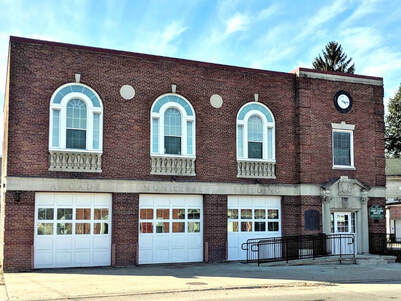 The society's office and research archives are at the Old Fire Hall at 15 Liberty Street, just off of Main Street. It was purchased by the Arcade Historical Society in 2009. This building was built in 1939 on the site of the first, wooden fire hall. The Society plans to use the building for archival storage, exhibits, classes, and lectures. The A&A 5oth Anniversary exhibit was held here in 2012, and the VFW 75th Anniversary Exhibit was held here in 2013.
In March of 2018 work was begun to make this building handicapped accessible with a lift to the second floor and offices for the Historical Society and Town & Village Historian as well as archive and research spaces. The work was completed at the end of 2019 and the Pioneer K-12 Student Art Show was the opening event during Winterfest 2020. In March 2020, the society's office and archive materials were moved from the Gibby House to the Old Fire Hall. Immediately after that, the society closed due to the COVID-19 pandemic, but operated remotely posting history stories on the society's Facebook page and creating various "socially distant" history walks. Our summer lecture series "History Speaks - Local Legends & Lore" began at the Fire Hall in 2021 and has returned in 2022.
MISSION STATEMENT:
The purpose of the Arcade Historical Society is
To collect, display and interpret to the general public, artifacts and records pertaining to the development of the Town and the Village of Arcade and the surrounding area.
To carry out educational and preservation activities to this end, in accordance with current museum and preservation standards.
To acquire items by gift, purchase, grant, devise or bequest, to be held or disposed of according to current state limitations, as prescribed by law.
To encourage historical research.
To mark places of historical interest.
To create exhibits and sponsor public programs pertaining to such history as it applies to Arcade and the surrounding area.
To control the properties owned by the Society.
To cooperate with other groups and individuals in the area in the preservation and promotion of the history of Western New York, as related to the Arcade area.   ​
331 West Main Street & 15 Liberty Street, Arcade, New York 14009 | Mailing address: P.O. Box 236, Arcade, NY  14009
(585) 492-4466 (Main St.) / (585) 492-0748 (Liberty St.)   |   office@arcadehistoricalsociety.org